I used to be fearless.

For example, I traveled all over the country with my girlfriend to rando music festivals, meeting even more rando people, during my early twenties. Oh, we are driving 14 hours straight to the next state? More Redbull, please. Don't worry about getting mace, or a bodyguard. Or even telling our parents. Why did they need to know we suddenly had the urge to drive all the way up north? We were twenty-two. Adults. No one needed to know where we were. If we got kidnapped, no reason to look in OHIO. #dumb

Now, I'm the parent that thinks back to all those incredibly stupid decisions I made when I was younger. And now I'm the one that has to worry for the rest of my life that my child is going to make some horrendous mistakes.

I mean, it's already started. Adrienne and I were poppin' tags at Goodwill a few weeks ago, when we went up to the checkouts to make our purchases. Adrienne was right there next to the cart. The cashier told me the price. I put my purse onto the counter and looked down, trying to dig my wallet out. As soon as I was opening the thing to get the money, the cashier said, "Your daughter is outside." I jerked my neck so hard, my head barely kept up. Sure enough, Adrienne was just moseying around OUTSIDE the doors with people walking in and out, who looked bewildered at this kid by herself. THIS HAPPENED IN FIVE SECONDS.

I dropped my wallet, change went everywhere, and rushed outside the sliding doors to grab the tiny human that I made. How could she have gotten out there so fast? All these burning eyes around me thinking I'm the worst parent ever. What if someone grabbed her? What if she had wandered off the sidewalk? I mean, that's a busy parking lot. All the what ifs. I can't even.

It was awful. I got down to eye level with her and asked her what in the world she was doing. She told me she thought I was outside. I guess she had just gotten lost. Or she was a really good liar, and she just thought it would be fine for her to walk off. OUTSIDE. WITHOUT ME. It's probably the latter, but, gosh, I don't even know. I told her that she always needs to stay next to Mommy, that she can't ever leave me like that, and how that scared me so bad.

I went back to the cashier to pay and thanked her while I finished picking up my change, red-faced. No, lady behind me, I don't need those pennies on the ground. Please just let me get to my car and ugly cry in peace.
That ordeal definitely put having kids into perspective.

And so I have actual fear now. I worry that I will always be too many steps behind my Adrienne, and not ahead of her. That I won't be able to always catch those falls or fix those mess-ups before she makes them. But, it all goes along with parenthood.

I will try my hardest to always be two steps ahead of Adrienne, and if for some reason I'm not, I will always provide the Hello Kitty band-aids.

Or stuff her into a bubble. Because, that's the most logical. 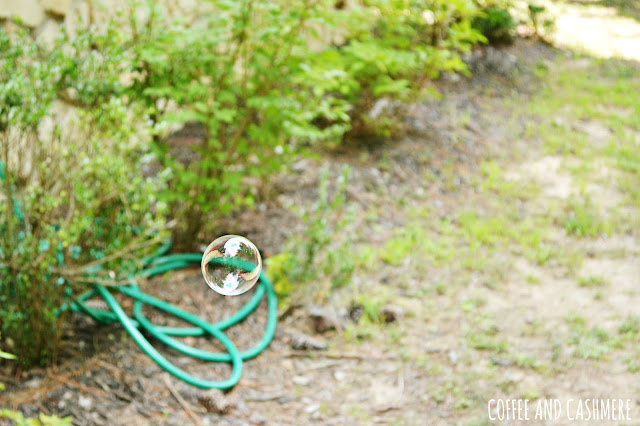 Posted by Coffee and Cashmere at 2:43 PM