Sorry For The Cheesiness

I have been absent from my blogging the past few days. I apologize. We have had a family emergency to deal with. Keep sending me the good energy, cause it's working. My brother is doing so much better.

On a much lighter note, I made the most delish macaroni and cheese dish the other night. You just have to try this. It makes a ton, and leftovers are just as good. Make sure to put a wet paper towel over your plate of macaroni when you microwave the leftovers! 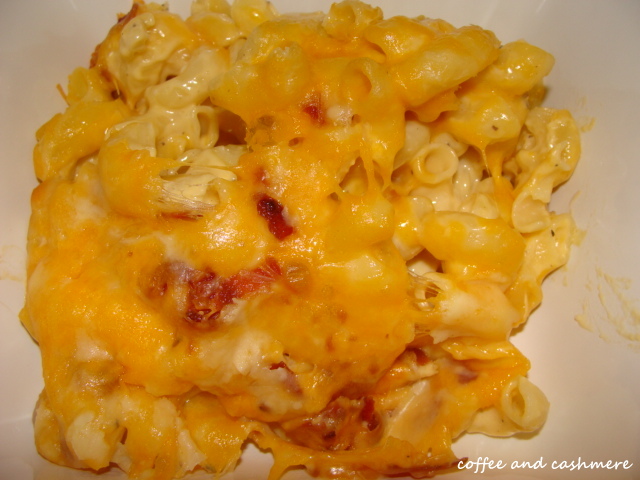 - Preheat oven to 350 degrees. Coat a 3-quart broiler-safe baking dish with nonstick cooking spray. I sadly don't have a dutch oven, so I used my Pampered Chef stoneware baking bowl. It is both retired and non-broiler safe. So, I just had to deal. Bring a large pot of lightly salted water to a boil.

- Cook macaroni for about 8 minutes in boiling water, then drain. Meanwhile, in a medium-sized saucepan, cook bacon over medium heat until crisp. Transfer onto paper towels. Carefully pour off drippings, returning a tablespoon to the pan. Add the butter.

- Whisk in flour until smooth. Then whisk in milk. Stir in onion flakes, salt, and pepper. Bring to a boil over medium-high heat, then reduce heat and simmer for 2 minutes.

- In a large boil, toss together cheddar, colby-jack, and mozzarella.

- In pasta pot, combine cooked pasta and cheese sauce. Pour half into the baking dish. Sprinkle with a generous cup of the bacon-cheese mixture. Repeat layer.

- Bake at 350 degrees for 20 minutes. Increase oven temperature to broil (if you have a broiler safe pan, which I didn't) and broil 3 minutes, until top is lightly browned. Yum.O.

UPDATE: Didn't have bacon when I made this again, so I substituted it with bacon bits and chopped up chicken. Delish. I also added minced garlic to the butter. Yummo times deux. 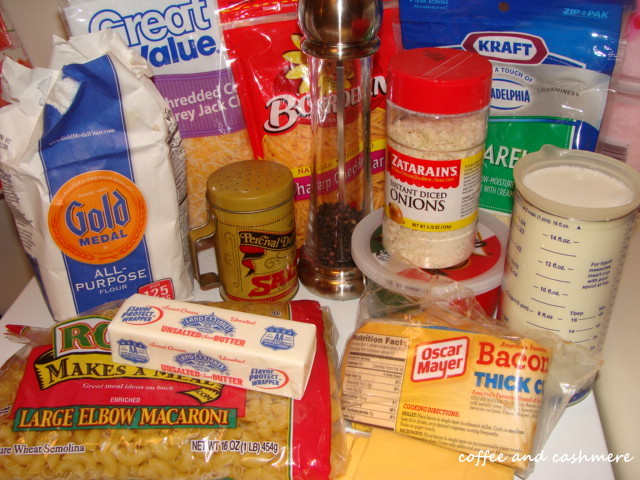 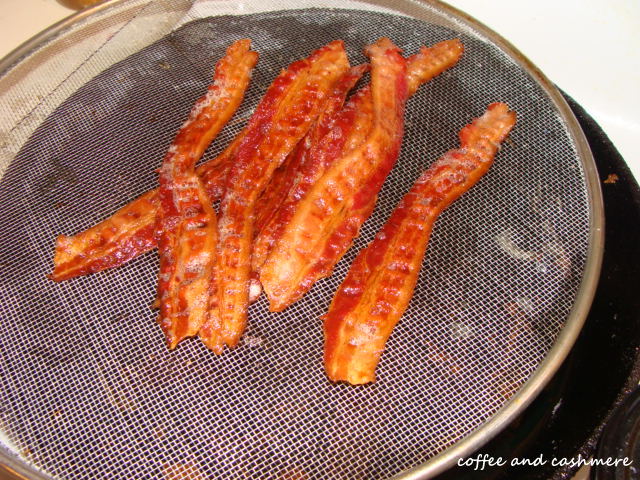 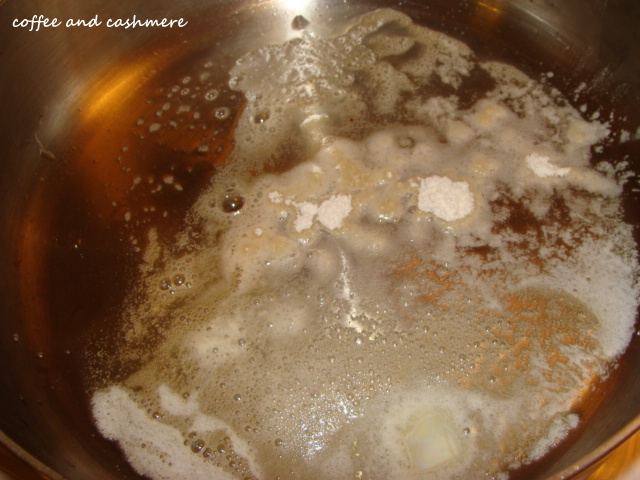 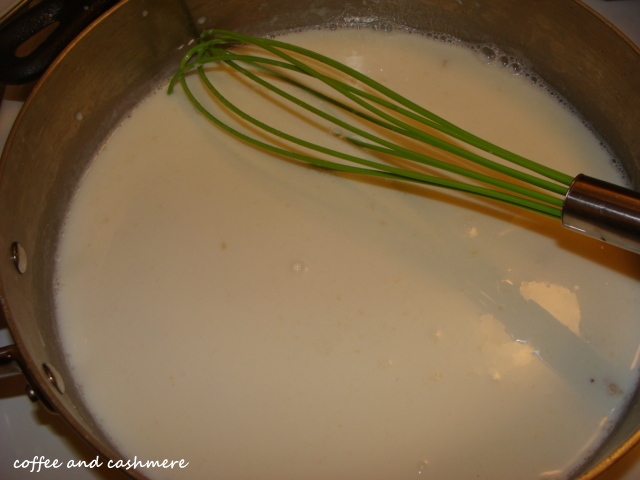 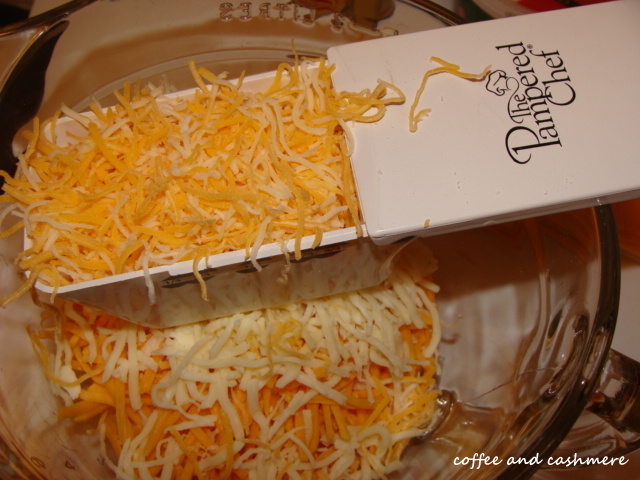 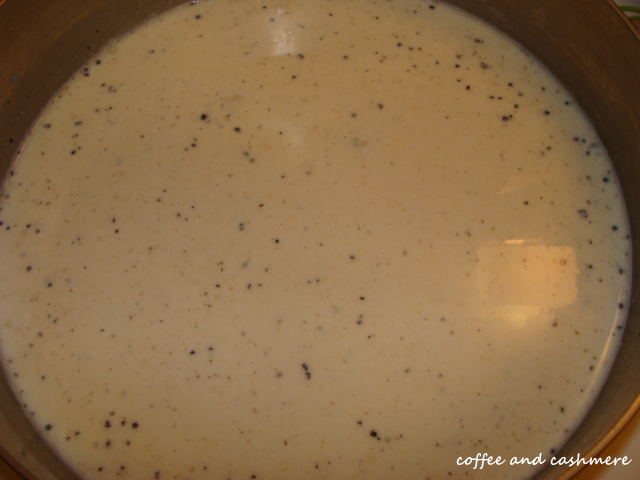 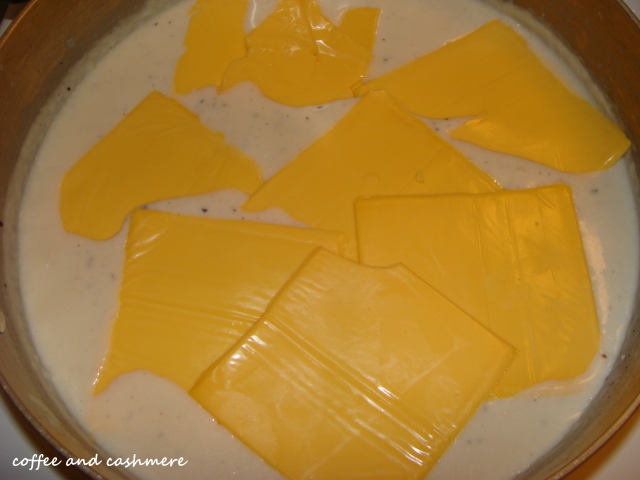 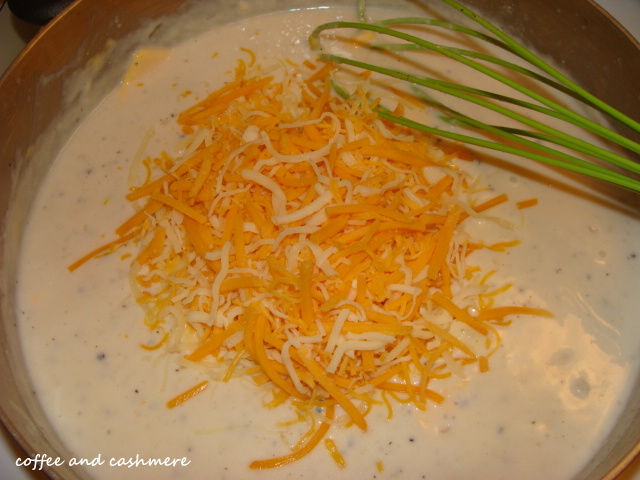 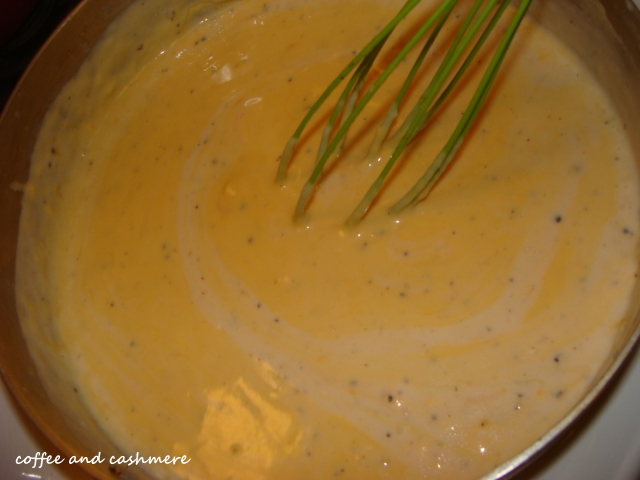 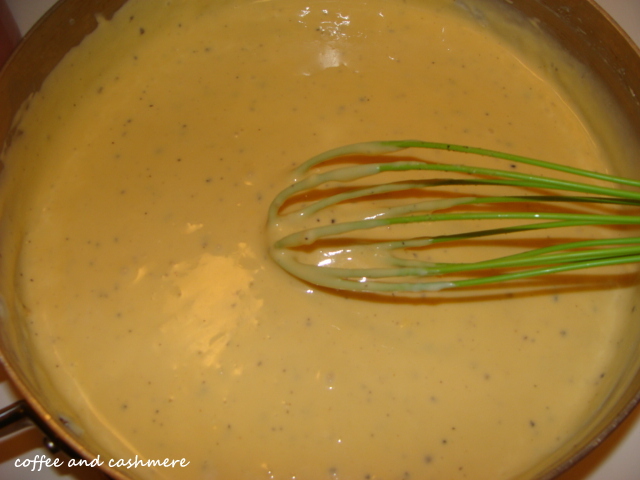 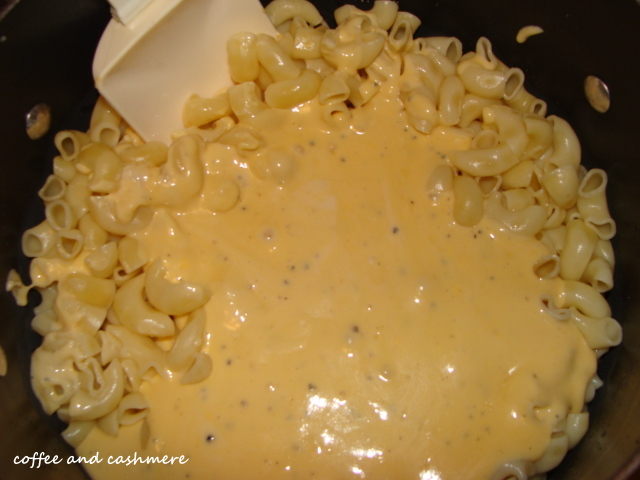 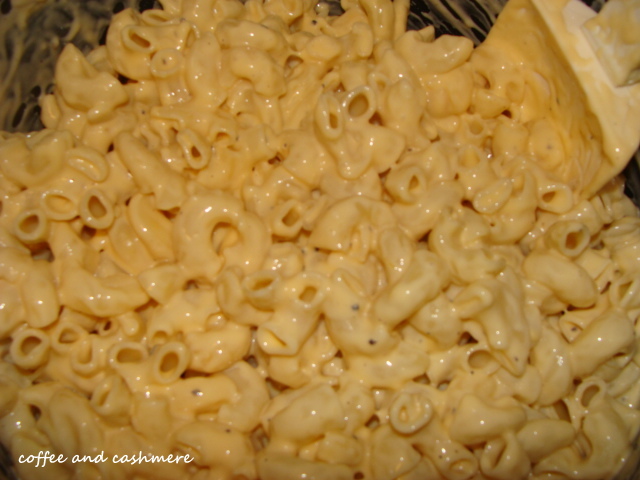 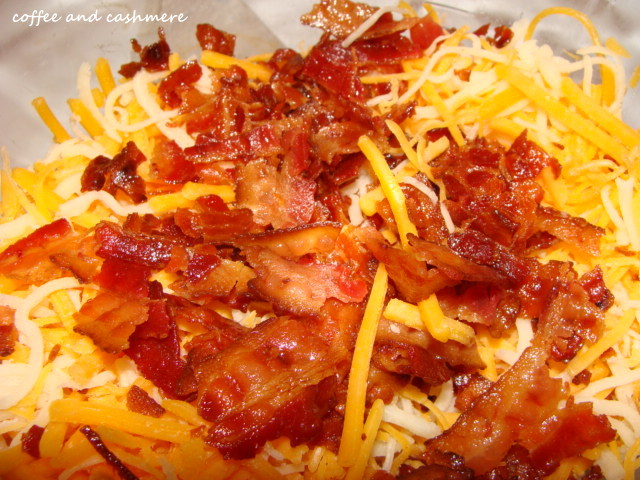 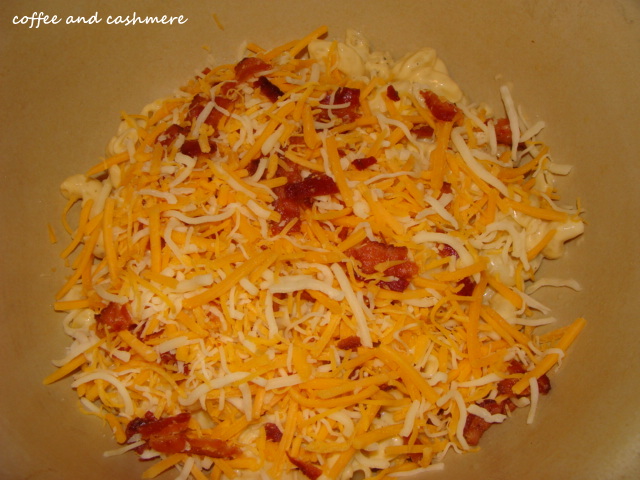 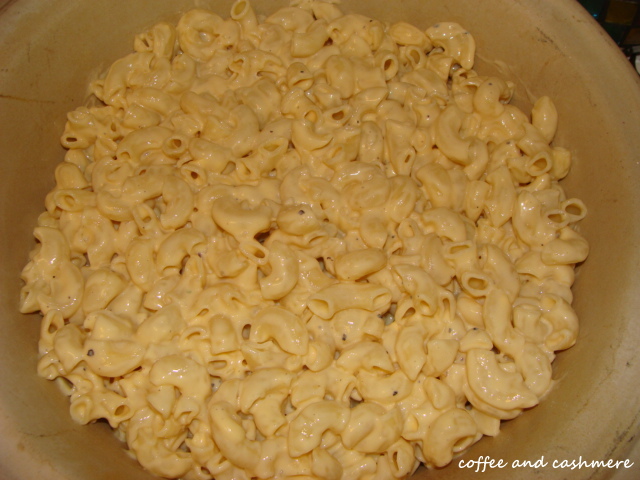 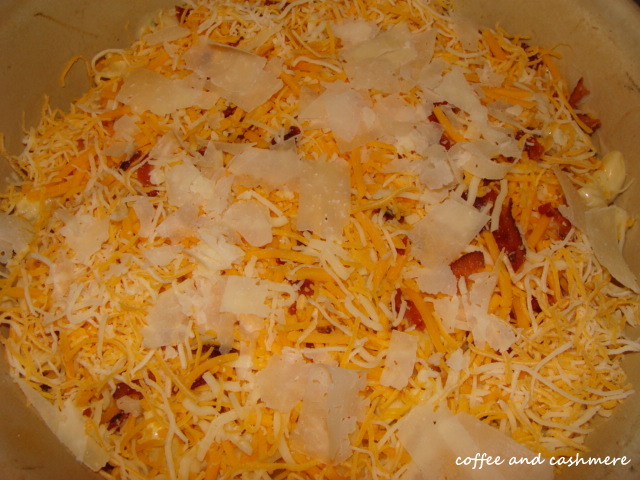 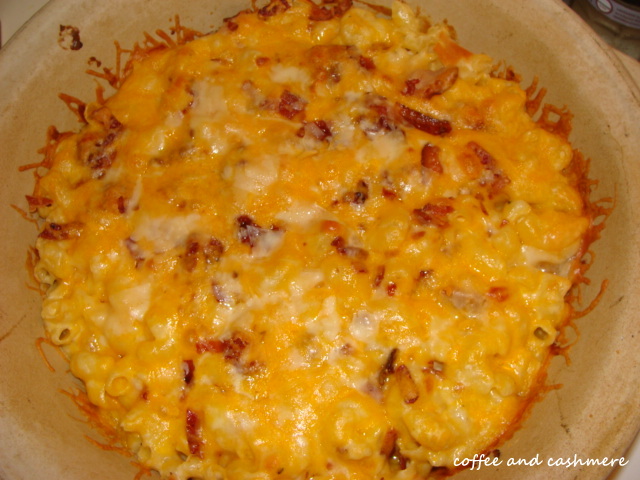 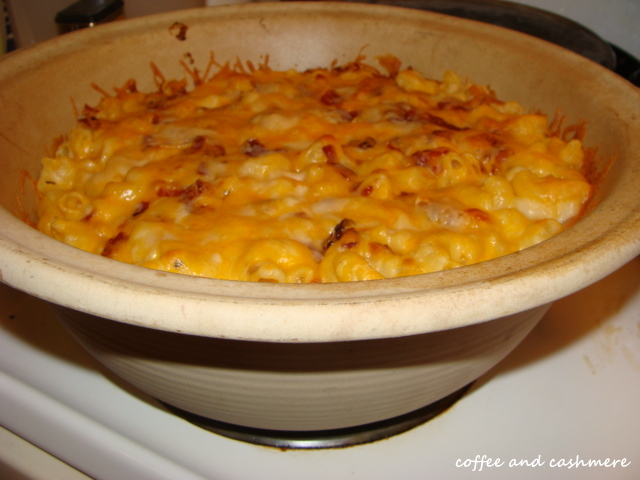 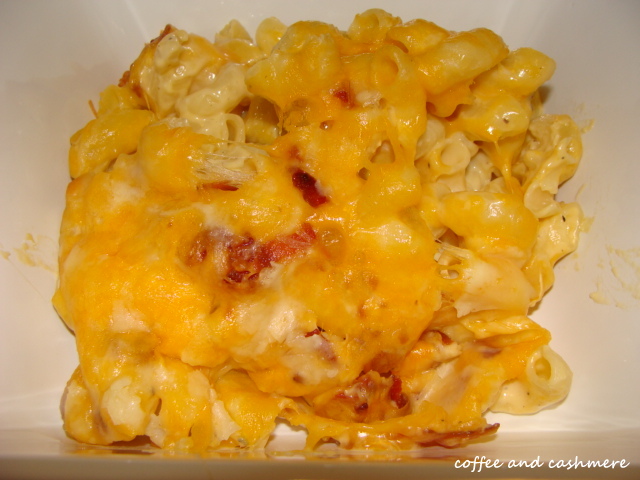 Posted by Coffee and Cashmere at 10:18 PM