Last year we spent Thanksgiving with William's family. He has ten brothers and sisters. No joking aside, it's always action packed when we all get together. Last year was no different. I envisioned making cute little Oreo turkeys and marshmallow pilgrim hats with Adrienne and her little cousin who is around the same age. My envisioning was skewed. They were one and a half. No dice. So, the night before turkey day, William's sisters and I sat up into the wee hours making Thanksgiving treats that I forced upon them. I'm pretty sure they hated me after we all went to bed.

The first treats were the dreaded Oreo turkeys. They looked super cute finished, but the process was a nightmare. Luckily, I had William's kid sister and brother, on my team. Kids love anything crafty. And/or messy. This included both. The gist of these things are Oreo cookies glued together, then choco glue some candy corns in the Oreo for some feathers. Oh yea, and also some Reese's peanut butter cups are needed. And the cutting of those things was a hassle. Then more choco gluing. Except I used red icing, and it looked like blood. Especially when it wouldn't hold the Whopper heads on. Or a tail feather came out. The kids thought that was great.

The other idea were the pilgrim hats. We started that with burning the chocolate chips. After attempting a second batch of melted chocolate to dip the marshmallows in, we burned that too. We basically scooped burnt chocolate onto the marshmallows, stuck them on some upside down cookies, piped some icing buckles on and called it a day, err, night.

Anyways, it was an experience. This year I went a totally different route for the Thanksgiving treats, and I'll share that tomorrow! 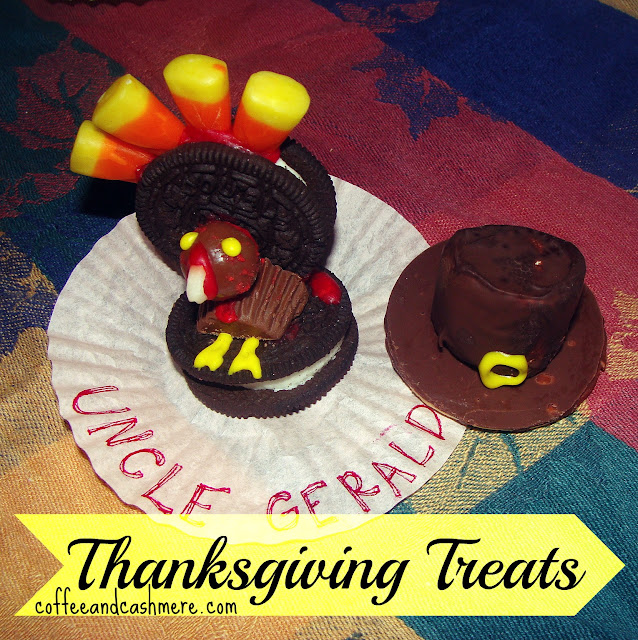 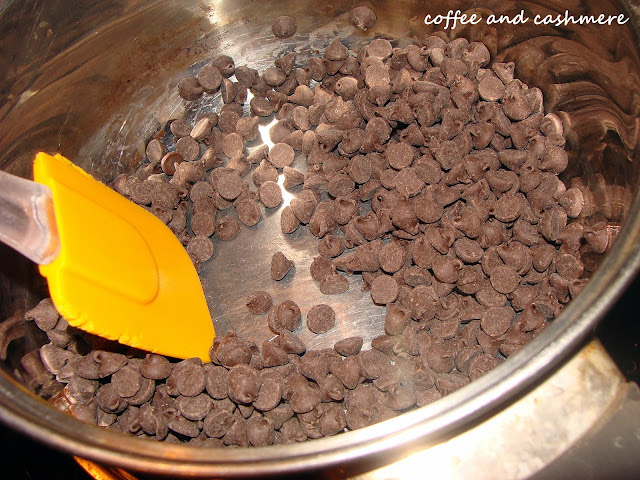 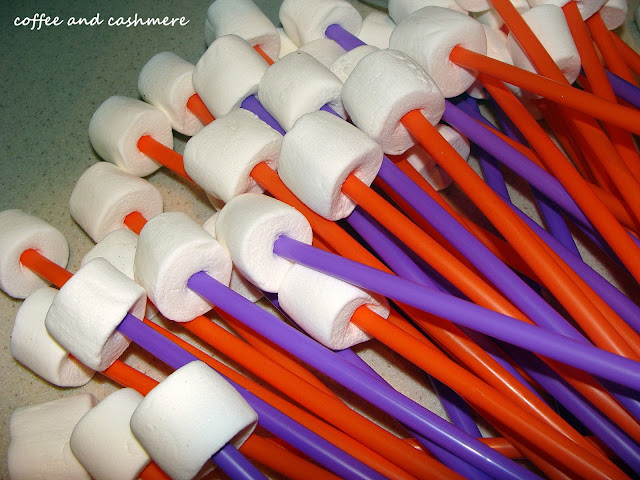 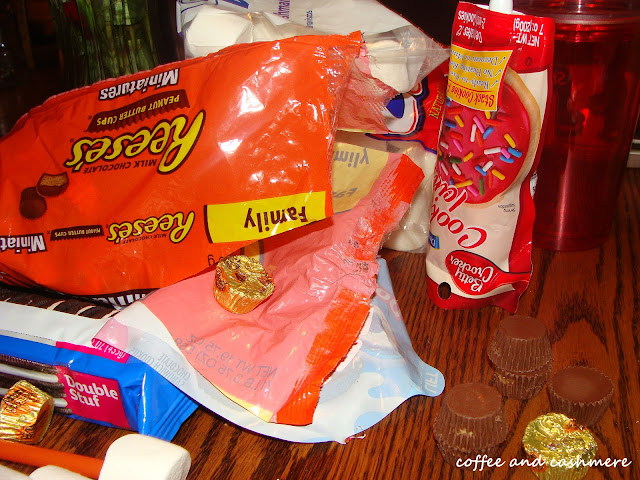 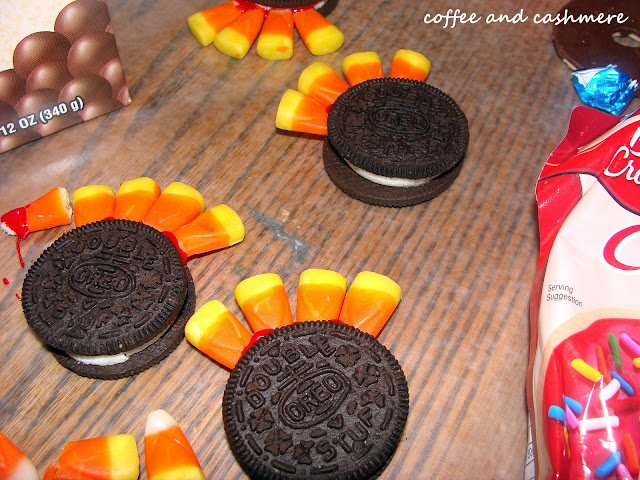 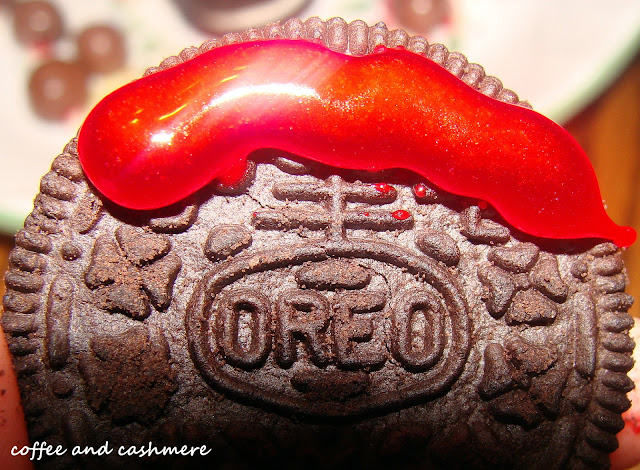 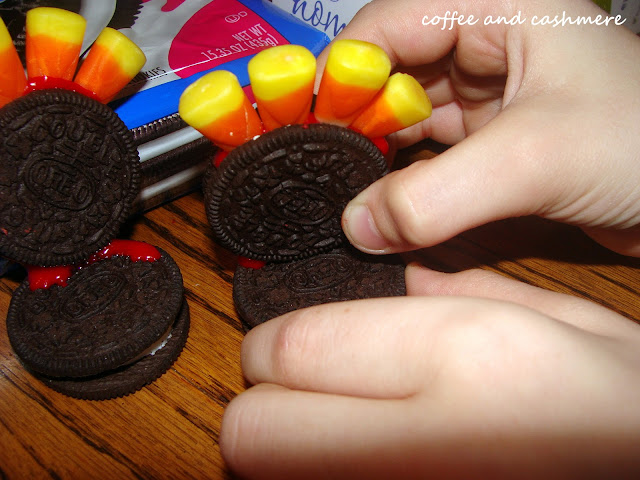 
- We are going to start with the tail feathers ::shake shake:: Get a double stuffed Oreo. Fill the inside rim with frosting or icing. Then stuff in candy corn to make feathers. Repeat this process until half of the cookies have tail feathers. Let dry.

- After those are dry, put a generous amount of frosting on the end of the cookie on the opposite side of the feathers. Place the tail feather cookie vertically on another double stuffed Oreo. This will essentially be the base. It might be a good idea to have these dry against a wall for the extra support.

- Let those dry and start opening the pb cups. Cut a sliver off of one end of the pb cups with a sharp knife. Squeeze a dab of ice/frosting onto the pb cup and place on the Oreos to make the turkey body.

- Glue a Whopper on top of the cookie and pb cup. Cut off the white tips of some candy corn to make the turkey beaks. Then put a large dab of red frosting on the Whopper and add the white candy corn beaks. The red icing makes it look like a turkey... what are those gross hanging down things called? Gobblers? I don't know. But it looks like it.

- Add some yellow icing eyes and legs. And done. They make super cute place card holders! I didn't have time to make name cards, so I just used some cupcake liners and wrote names on them. Fancy smancy, right?!

-Melt chocolate and dip marshmallows. Let those dry. Glue bottom of marshmallow onto the bottom of a fudge stripe cookie. Use yellow icing to make a buckle.

Don't forget to check out my newest contest going on right now to win an outfit from Mud Pie AND VOTE FOR MY CHILD! Go HERE to find out how to enter and help ME out!!

Also, if you like my stuffs, help a homie out and vote for me on Top Mommy Blogs by clicking the picture below. Just one click. It will take you to the Top Mommy Blogs website, but you voted for me by just clicking that happy cartoon lady below! YOU CAN VOTE DAILY!! Thank you guys!!

Posted by Coffee and Cashmere at 7:23 PM